CINES was at the HPC User Forum

The CINES was at the 58th HPC User Forum organised in Paris. 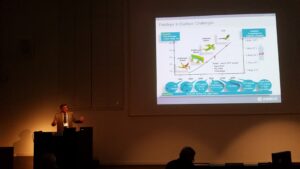  This forum take place in city other the world to give the opportunity to the the users of the HPC word to meet together. In France, it’s the GENCI who participate in the organization of the meeting. It was an opportunity to see presentations of the current projects, but too, to see the great announcement at the Europe and United State level. France was represented by GENCI. The politicy measures who take place to give access to the HPC resources and the futures devlopments.
This two-day event take place in the IPGP (Institut de la Physique du Globe) in Paris. During these two days, some importants results who were compute on the Occigen machine, was shown by the Airbus company. GENCI speak too about the “ecosystem” of the HPC in France (from meso center, to national and european computing center).

The Aibus company show a record of a simulation based on a run from Occigen. This record was run during the “great challenges” period  before the grand opening of the machine. 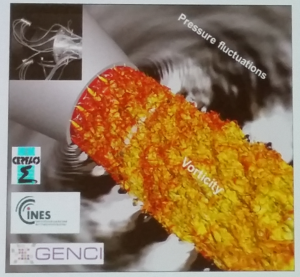 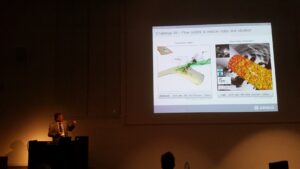 Following damage to the NY bay by hurricane Sandy, the second most destructive on the US territory after Katrina, the authorities bear interest on that HPC can offer in terms of predicting the consequences of climate change in New York Bay

Peter Luigi Vidale ( Reading) made ​​a presentation on climate and weather modeling to Petascale, recalling that CMIP6 will run from 2016-2019. The Petascale can already take better account of the effects of flows in the Alpine valleys by allowing a finer spatial scale.
The EU project named PRIMAVERA 2020 includes 19 institutions and aims to achieve climate simulations with high spatial resolutions. The needs are huge : in comparison, requires 670 PRACE HI- Million hours on Archer ( Cray XC 130 , UK). 144 million hours on the Cray X6 equivalent HERMIT a simulation consuming 260 million hours on Archer.
The presentation by a member of “Frederic National Lab for Cancer Research” (Jack Collins ) denounced the barrier that exists between researchers in the world of the living and the HPC and the need to be born cross skills which is far from simple. There is also a crucial need a new algorithm to process the very large accumulated database.

President of the Teratec said the Big Data emerged in new areas such as agriculture and is one of the highest point of investing in a firm like Limagrain now.

The work of the climate community has been amply demonstrated, and it promises to be rich in the coming years. Other major areas (health, agriculture, CFD , automotive, finance, BIO … ) were present. Some large US agencies made ​​us part of their ongoing work. It was an opportunity to compare the progress in many areas.

This allowed us too, to meet some users CINES and exchange with them on the services offered. 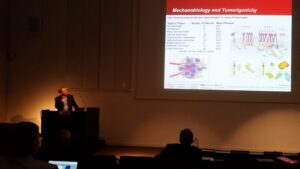 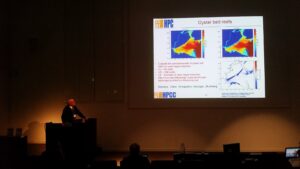