What is a metamodel?

In general, we define the metamodel as a representation of a particular perspective on models. If we are interrested only in the studied system in the pair language/ model, then we joined the acceptance of the most common metamodel: model description language models.

Why develop its own metamodel?

Any formalization is an expression of views on a system, the creation of a metamodel is essential. CINES not currently available modeling tools incorporating a metamodel. Consequently, it was necessary that he creates for himself.

There is a notation (BPMN: Business Process Management Notation) for the formalization process. It has not been chosen for multiple reasons:

CINES was therefore obliged to define its own meta-system business processes CAP. Some of the key elements thereof are presented below

The following are some of the set of rules specifically developed at CINES for uniform formalization of business processes Archive service PAC. These rules apply both on the maps on the basis of data specification sheets objects formalized. 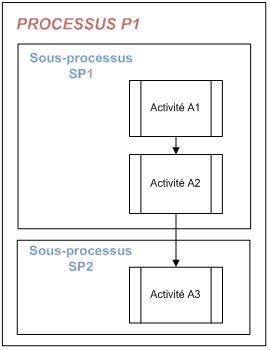 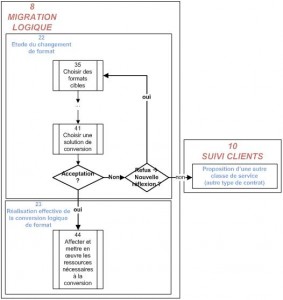 The diamonds are graphical elements to formalize the actual multiple choice and conditions associated with entries in the objects downstream. If this is a decision (e.g. “migration is relevant?“), The task of deciding is a component of the object located above the diamond. (The latter can therefore simply to separate the different possibilities of appeal other objects). Recall that a diamond can not be distinguished two cases that both ((yes / no) or (ok /ok)). A succession of diamond can be considered. In this case, the rules set out above still apply. Their title must necessarily contain a question mark

When you need to include a mapping of a process object that is not fully detailed or her place and / or its name is not yet precisely determined, the title is listed in gray mapping. 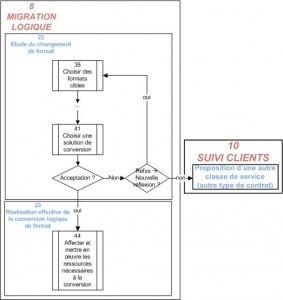 In the case of links between processes or subprocesses, if the entire process or sub-process is called, the sub-process or activity which is called first will not be included in the mapping. The link will point to the general purpose. However, the basic characteristics of sheets makes systematically the link between the two activities.

In the database specification sheets describing the objects mapped, the pilot of an object does not appear in the list of stakeholders affected (because: duplicates).