CINES hosts advanced equipment including the supercomputer by GENCI ( Grand National Equipment for Supercomputing ), which appears to date from the first European machines.

The computational power made available to the research comunity gives researchers the opportunity to address big scientific challenges. Extreme simulations of complex physical situations, which were not realizable until recently, in various domains as fluid mechanics, physics, chemistry, biology, climatology, astrophysics, environment etc…are now possible. Numerical simulation has become a method for research at the same level as analysis and experience, and therefore, the community of users of supercomputing capabilities increases and is renewed every year.

A supercomputer ranked at world level with a peak performance of 3.5 Pflops[1] 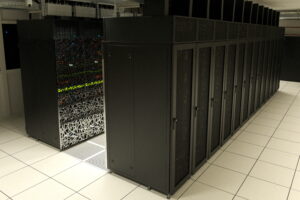 Result of a competitive dialogue procedure conducted by GENCI parallel bullx supercomputer, designed by the French company Bull is hosted at CINES since December 2014. This system has a peak power of 2.1 Pflops (2 million billion operations per second). Designed on the basis of shared memory compute nodes interconnected via an InfiniBand network , it consists of 85824 core Intel Xeon ™ each with 2.5 GB of memory.

The clusters hosted at CINES are equipped with basis software : compilers, mathematical libraries, parallel tools etc … and also with software specific at particular scientific domains, depending on the needs of the scientific community. All these tools are chosen and installed to get the best performance.

The department of Intensive Computing aims at training, advising and helping researchers to use the computing environments, at managing and optimizing the usage of the clusters, and at participating in national and european projects. It offers:

CINES has strong connections with ‘Maison de la Simulation’ (House of Simulation) in Paris as part of its participation in the « Prace Advanced Training Center » from the European project PRACE and proposes international trainings for parallel computing.

A user’s commity, composed of elected representatives gives the opportunity to CINES to have a better knowledge of the needs of the researchers and to put into place procedures and tools to respond to them.

Out of production of the partition Haswell