1) Connection to the machine

You must use ssh on : occigen.cines.fr

The operating system is of the linux type based on the BullX SCS (Redhat) software suite.
The cluster includes several connection nodes for users. When the connection is established, the user is on one of these nodes. The assignment of connections is based on the availability of login nodes. It is possible that two simultaneous connections may end up on two different login nodes.

CINES provide lot of softwares on his clusters, and often, various versions of each software. In order to further prevent conflicts between differents versions, you need to define a specific environement for each software.

The available software can be viewed or loaded via the following commands:

The compute nodes of the Occigen machine can be used in two modes :

Since spring 2018, we have been offering more flexibility, allowing you to request either both architectures at the same time or one or the other without specifying which one. The table below summarizes the different possibilities and the SLURM guideline associated with each case.

You will find batch submission script templates describing all these cases in the CINES gitlab in the following directory :

In shared mode, several jobs can run simultaneously in one node. A technical mechanism prevents jobs from interpenetrating each other, there can be no overwriting of memory areas, nor “theft” of CPU cycles.

By default, all jobs thatrequire less than 24 cores will be in shared mode.

All nodes in the shared partition have 128 GB of memory.

Jobs with a demand greater than 23 cores are not affectedby the shared mode, nor are jobs that explicitly request the exclusive mode.

These tasks correspond to command lines containing sequential executable (serial) and their argument(s) if necessary. The executable is called pserie_lb.

In the SLURM script to give indications on the resources it is possible to use the following directives:

In a shared node, each job can consume all or part of the node’s memory.

Or, a job may need to consume a lot more memory.

In this second case, the job manager will not place a new job in this node, until the memory is freed. For this example, job J1 will be billed for 1 core, while job J2 will be billed for 5 cores (maximum between the number of cores requested (–ntasks=1) and its memory size divided by 5). On this simplified example, the maximum is 5, so it will be charged 5 cores.

Here are some examples of using these parameters
Example1:

#SBATCH –nodes=1# A single node #SBATCH –ntasks=48# As many threads as desired #SBATCH –threads-per-core=2 # Number of threads per physical core: i.e. a sub-multiple of the number of tasks >–encoded_tag_closed here we reserve 24 physical cores

If you do not reserve all the core and/or memory resources, another job may start on the node using the remaining resources.

It is possible to impose the “dedicated node” mode using the directive:

If no memory request is specifiedby the user in the submission script, the job running on a shared node is assigned a memory limit of 1 GB per job.
The default value is deliberately low to encourage users to define their needs. Here is the directive to use to express its memory requirement:

PSERIE is a tool that allows you to perform sequential tasks or jobs within an MPI job These tasks correspond to command lines containing sequential executable (serial) and their argument(s) if necessary. The executable is called pserie_lb.

When using this version, the MPI process (or rank) #0 distributes the tasks to be performed to other MPI processes. It does not execute any commands. The other processes are each assigned a task. Once a process has completed one of its tasks, rank 0 assigns it a task that has not yet been completed. This distribution is performed as long as tasks have not been executed (as long as command lines of the input file have not been processed). There is no order of execution of tasks; the first MPI process that is ready to receive a task will be assigned the first available (not executed) task from the list in the input file. The input file can contain more command lines than the number of processes. 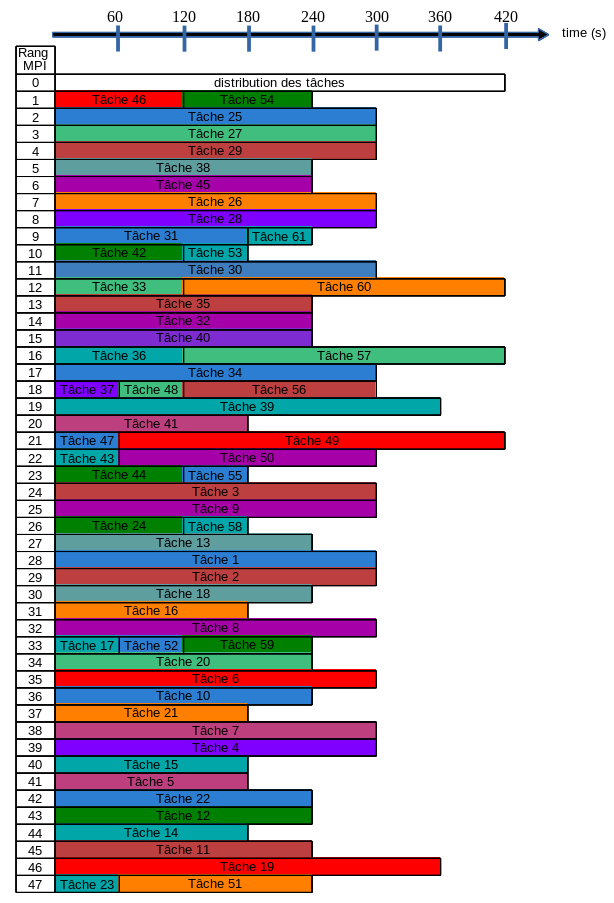 To use this tool, three modules must be loaded : intel/17.0, openmpi/intel/2.0.1 and pserie. Pserie requires an input file where the commands to be executed are located.

Note: There is an example of use with the associated slurm script under /opt/software/occigen/tools/pserie/0.1/intel/17.0/openmpi/intel/2.0.1/example with the input file named fdr.dat which contains the list of commands to execute. The commands in this file include simple echo and sleep commands.

Since November 4, 2019, in consultation with GENCI and the IDRIS and TGCC computer centres, CINES has also been developing the “bonus” mode. The “bonus” works , until now addressable via the option “-qos=bonus” are deleted in favour of a systematic additional allocation of any project of 25%.
More precisely:

The following utility variables (non-exhaustive list) can be used in the user commands (Shell) of a submission script.
An implementation policy has been developed to achieve them, here are the main lines for each of them:
a) To make the best use of the machine’s resources:

b) To fairly arbitrate competing demands for resources:
Using Slurm’s fairsharemechanism:
an exponential decrease in priority, with a “half-life” of 7 days. in the Slurm documentation.
This mechanism allows an “equitable” distribution (between projects) of access to computing resources and in particular avoids saturation by a single user who would have submitted a very large number of jobs in a short time.

Resources can be mobilized in a TETRIS-type management approach (Time x Nodes ): a waiting job can start before a higher-priority job as long as it does not delay the moment when the resources it is waiting for become available ( cores.hours and number of nodes)

Using Slurm’s backfill mechanism:
a low priority job will be started if it can use the free resources, waiting for the start of higher priority jobs, without delaying their starts.

For the same number of nodes requested, the shorter duration of use has a higher priority.

Note :The parameters and thresholds, configured globally, are adjustedby the CINES teams for the best management of requests defined by the user, who defines the profile in line with the conduct of his simulation projects.
Modalities for submission:
Only three pieces of information are required when submitting the work:
(See FAQ “Occigen” > “Compute on Machine” for an example)
Considerations on the use and behavior of the machine:

When a job exceeds its memory request, the process responsible for it is killed by SLURM and the job stopped. Other jobs active on this node will not be impacted. If a job causes a “memory overflow”, it is processed at the Linux kernel level and neither the node nor the other jobs should be affected.
An error message then appears in the output file:
…

Shared jobs will also be taken into account in the blocking process in case of over-occupation of /home and /scratch storage spaces. Shared jobs will be assigned to partitions whose names will be suffixed bys. Example:BLOCKED_home_s for a shared job blocked for exceeding a quota on /home.

To notice that a job is started in shared mode, just look at the partition in which it is assigned:

We see that the job 919914 runs in the sharedpartition.

The occigen3100 node in the “mixed” state already contains one or more jobs.