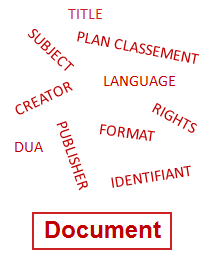 Metadata describing the packages are gathered in an XML “deposit form”. The CINES has 2 deposit forms, the sip.xml and the ArchiveTransfer.xml. Their use depends on the project (as an example of selection criteria, knowing if the data are public records or not).

The sip.xml is specific to PAC. To describe the archived document, a set of metadata sufficiently generic to be useful with all the projects had to be chosen. The 15 Dublin Core metadata set seemed to be the obvious one.
Some management metadata specific to PAC are added to this set to complete the description of the document and of the files that composes it.

So, each document deposited in PAC is linked to a sip.xml file which described it on 3 levels:

See the metadata composing the sip.xml and aip.xml (PDF document).

Aip.xml are preserved in the archiving system at the same place as the documents they described. Their content is re-injected in a database to make the researches in the system easier.

The ArchiveTransfer is specific to public records archiving projects. Its format is called SEDA.

SEDA implies the constitution of an archiving profile, one per project, which is used for the selections of the transferring sheet metadata and to define their content. SEDA allows a description of the package on several levels, from a general to a more precise information, from the package (describe in an “Archive” element) to the file (“Document” element). It’s possible to describe sub-files (“ArchiveObject” element).

The CINES developed its own SEDA profile, smaller than the general one, from which users build their own profile.

Example of the composition of a package and its SEDA description: 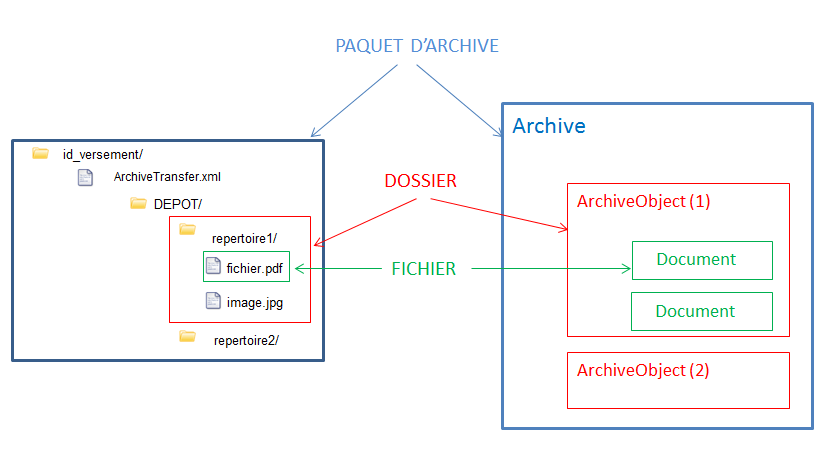 SEDA 1.0 is actually implemented in PAC.